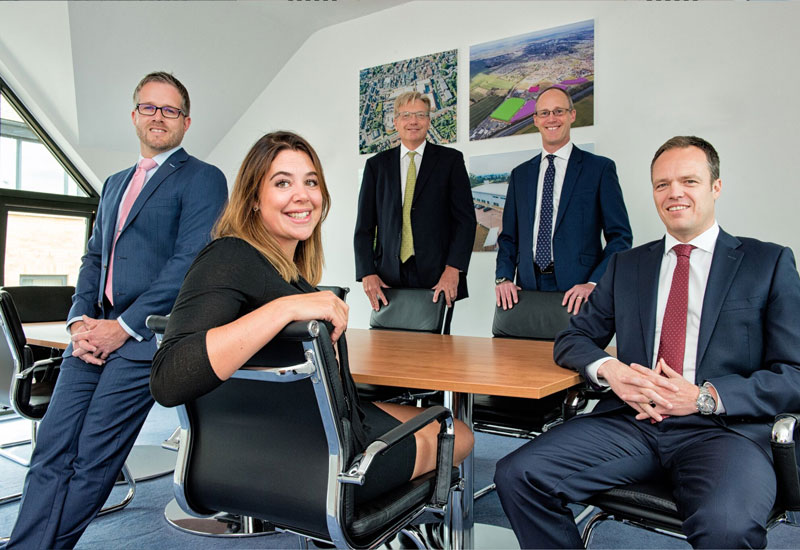 The Churchmanor Estates Company PLC, a key player in the region’s commercial property market, has its eyes firmly on the future with plans to expand its services supporting the retail, leisure, mixed-use, industrial, business parks, research and development and office sectors.

The company, which has been based in Ipswich for the past 35 years, has recently strengthened and expanded its team to build on its existing areas of expertise.

Churchmanor has a wide portfolio of developments across multiple sectors including business parks such as the 60-acre Suffolk Business Park in Bury St Edmunds and research and development parks including the 250-acre Chesterford Research Park in Cambridge for tenants such as Phizer, Astra Zeneca and Illumina.

The company also specialises in urban regeneration schemes and have recently completed the £28 million Chequers Shopping Centre in Huntingdon which includes lettings to Marks and Spencer, Next and TK Maxx.

“We have developed over 3 million square feet of commercial and retail accommodation in the Eastern region since we began, and have developed a wide ranging skill set to deal with the complexities of commercial property development. As well as pursuing a range of bespoke developments across the region, we have also entered into partnerships with landowners including Local Authorities, and Cambridge Colleges to assist them to maximise the value of their land holdings. These long lived partnerships continue to be one of the hallmarks of the company.”

Stephen Clark added: “My fellow Directors and I are pleased to announce these new appointments and newly promoted Directors to assist with our increasing number of projects enabling us to expand our range of services, especially in the area of urban regeneration. “The company look forwards to continuing its partnerships with landowners but also to extend its work with occupiers such as Birketts LLP, to help plan, design, construct and finance new commercial accommodation. Occupiers are increasingly looking to own their own freehold accommodation but the process of getting there is quite daunting – this is where Churchmanor can step in to provide a bespoke property solution.”

Churchmanor’s most recent office completion was the new 55,000sq. ft. headquarters for solicitors Birketts LLP in Princes Street in Ipswich, which was formally opened by HRH Prince Edward, the Earl of Wessex, in May 2018. Churchmanor is also behind the re-generation of the former Archant offices on Lower Brook Street with the site forming a key link between the town centre and the waterfront.

Matt Cloke, Development Director, has been overseeing the project. He commented: “We’re preparing the site for a McCarthy & Stone retirement living development and have invested £350,000 in a large scale archaeological dig to ensure the site’s history and heritage has been recorded and preserved.

“We are passionate about the land that we’re developing which is why it’s extremely important to us at Churchmanor that we look at the sustainability of our schemes and their impact on local communities and environments.”

Churchmanor also has a very strong presence in Colchester, having built Colchester Business Park in the 1990s. It has recently completed the £12 million Stane Leisure Park, the first phase of the Stane Park development in Stanway which includes the new Princess Charlotte pub, along with a selection of restaurants, including KFC, Bella Italia, Nandos and Starbucks. Planning permission was granted in August for phase two of Stane Retail park – 180,000sqft of retail accomodation which, when completed, will be home to B&Q, Aldi, Marks & Spencer Food Hall together with a terrace of other retail operators.

“Stane Leisure Park is not a typical out-of-town restaurant outlet – it offers a high quality environment for eating and relaxing” said Mr Beards, Churchmanor’s Construction Director. “Over 100 mature specimen trees are being planted throughout the scheme and restaurant terraces for outdoor eating will be defined by contrasting paving and a small public square, articulated by pleached trees and a children’s play area. We have taken great care over the design layout and landscaping within the scheme and we are pleased to be able to bring these much needed facilities to the residents of Stanway”

Alan Rosten, summed up: “I feel very fortunate to have joined and be working for such an experienced and forward-thinking company, especially as Churchmanor continues to expand and further facilitate new commercial developments within the Eastern region.” For further information, please visit:www.churchmanor.com